Which nitrogen generator for which application?

HomeBlogWhich nitrogen generator for which application?

It remains a difficult choice: the nitrogen generator. There are several mechanisms of action, but most of them fall off immediately, usually because they are outdated (liquid nitrogen, membrane systems, VSA). The systems that remain are the PSA, Pressure Swing Adsorption and the VPSA, Vacuum Pressure Swing Adsorption. But what are the differences?

Pressure Swing Adsorption indicates that it is a machine that produces a continuous flow of nitrogen. These generators always have two tanks (or tank groups), and both types of systems have two phases per cycle:

When one tank adsorbs, the other regenerates, and after saturation of the CMS, the functions of the tanks are swapped (‘Swing’). 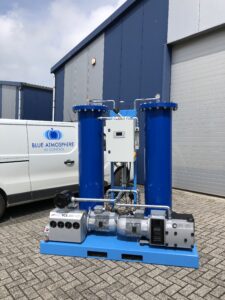 VPSA systems do not use an air compressor, but a blower. As a result, the operating pressure is considerably lower. That doesn’t sound positive, but in many cases it is: less is more. It is often not necessary at all to supply nitrogen at 7-8 bar. It takes less energy to make nitrogen at lower pressure. That quickly saves 20-30% of the energy consumption. Perhaps more importantly, the purchase price of a VPSA is up to 30% lower. The smaller the requested flow rate, the greater the difference.

To be able to compete with VPSA technology, cheap PSAs are built for the storage of fresh product. Savings are made on the tanks, for example by buying standard tanks on the market. The CMS cannot be fixed in these tanks. It is therefore loose in the tank, will move due to pressure differences and the air flow, and will therefore pulverize. This is one of the reasons for a relatively rapid decline in PSA capacity. A good PSA has straight tanks, of which the lid has the same diameter as the tank itself. This offers the possibility of installing an air distribution system, and securing the CMS properly.

Another saving is the choice for a cheap compressor or a moderate filter street. The cool dryer, which should be placed after a compressor, is often omitted. The compressed air then does not meet the standards that have been drawn up for this (on request we will share the ISO standard with you). Warm, moist air is disastrous for CMS, and drastically shortens its lifespan. It is worse if the filter street is not in order. Then there is the possibility that oil residues bind irreversibly to the CMS. As a result, the capacity decreases, sometimes already after 2-3 years, and then there is nothing left but to replace the CMS. This makes a cheap PSA very expensive after all. Because a VPSA is equipped with an oil-free blower, the CMS can never be contaminated with this type of generator.

A PSA is regenerated by venting the pressure built up in the tank with oxygen-saturated CMS. The regeneration works fundamentally differently in a VPSA. A vacuum pump ‘pulls’ the oxygen from the activated carbon. This process is very effective, because any accumulated water (the RH in cold stores for fruit is usually >95%) is also removed. The CMS is therefore actively cleaned.

Finally, an added value of the VPSA is that, in addition to injecting, it can also circulate. In the injection mode, outside air is used for the production of nitrogen. Outside air consists of 79.2% nitrogen and 20.8% oxygen. Depending on the machine settings, the generator removes 17.8-20.5% of the oxygen. The remaining nitrogen is then transported to a cold store (‘injected’) with the aim of lowering the oxygen there. An alternative, which only the VPSA offers, is not to take in outside air, but air from the cold store to be conditioned. As with a CO2 adsorber, two pipes are then required. Because the incoming air already has a lower oxygen value while circulating (certainly as the pulldown progresses), it is becoming easier to make pure nitrogen from it. As a result, depending on the type of machine, the pulldown is about 20% faster in circulation mode. However, the same VPSA generator can also inject, so that it can prevent the oxygen influx with a slight overpressure in the event of small leaks from a cold store under low oxygen values. A PSA cannot circulate due to the higher pressure.

But when should a PSA be used? PSAs are of course an excellent solution for many applications. For example with volumes larger than 100 m3h-1. At this flow rate, a VPSA is relatively ineffective. In some cases very high purities of nitrogen are desired with residual oxygen values lower than 0.1%. A PSA is then advantageous, because the loss of flow rate at higher purities is less due to the higher working pressure. When gases are mixed, including the nitrogen from a generator, this often happens with gas mixing systems that requires a minimum pre-pressure (mass flow controllers > 5 bar). Here, a PSA is the only choice.

In short, of course, in addition to VPSA’s, we build PSA nitrogen generators for numerous applications. We offer these PSAs with a solid air compressor (Kaeser) with internal cool dryer. Because we build tanks and controls ourselves, you can count on a maximum achievable lifespan.

Why is dimensioning Controlled Atmosphere machinery so important? We would like to pay a little more attention to this. This mainly concerns the CO2 adsorbers. Optimal CO2 values ​​in a cold store are different for every fruit or vegetable variety. Even for different cultivars and growing locations, they can be different. For example,…