What is Controlled Atmosphere?

Controlled Atmosphere (CA) is used to buffer fresh produce immediately after harvest, making it available for longer at the market, at better selling prices. It is a storage method in which the concentrations of oxygen and carbon dioxide, as well as the temperature and humidity, are optimized in gastight cold stores. CA is often used for long-term storage of apples, pears, kiwis and various types of berries, but also for example for cabbages and green beans. The combination of an altered gas atmosphere and a lowered temperature prevents loss of quality due to ripening, moisture loss, and storage aberrations. The oxygen level is greatly reduced and carbon dioxide is increased as much as possible. Outside air consists of approximately 78% nitrogen (N2), 21% oxygen (O2), 0.045% carbon dioxide (CO2). CA lowers the oxygen level generally to 0.5-2.5%, depending on the type of product and the variety. CA conditions extend the shelf life of fruit and vegetables with a factor of 2 to 4, which means that apples, for example, can be stored all year round, and berry varieties can be stored for several months.

In order to apply optimum CA conditions, cold stores are made gas-tight and connected to a CA system consisting of a CO2 absorber, an N2 generator and a control system for measuring and controlling gas conditions. CA cold stores typically have a size of 100-1000 tons. An average storage facility has 2-100 cold rooms. Blue Atmosphere designs, produces, installs and services CA equipment and control systems. But we also act as a consultant when it comes to cooling systems for fresh produce and the construction of cold stores.

The history of fruit CA storage

The idea to storing fruits and vegetables is not new, nor is the favourable effect of optimizing gases during storage. Early storage of crops in pits with restricted ventilation in the United Kingdom, for instance, already extended the shelf life very clearly. Early scientific studies in the 19th century showed that fruits consume O2 and release CO2. It also revealed that fruits did not ripen under anoxia, and that ripening was resumed when fruits were re-subjected to ambient air.

The first commercial storage facilities were built in France and the UK in the late 19th century. The temperature was kept below 1°C with blocks of ice. Fruits could be stored for months, but increasing CO2 values ​​were found to be damaging in the end. The real breakthrough came in 1927 when Kidd and West carried out the first comprehensive and well-documented studies on the effect of CO2 and O2 on fruits and vegetables during storage. They called the new storage technique ‘gas storage’. In 1945 they introduced the term Controlled Atmosphere (CA).

CA storage started with controlling CO2 levels. The storage facility was refrigerated mechanically, and CO2 was fixed at a level that was cultivar dependent. By means of ventilation the excess of CO2 was removed from a cold store, creating an equilibrium between gas conditions in the storage facility and in outside air. In these systems the amount of nitrogen was kept constant at 79% (kPa), the same as in normal air. When CO2, for instance, was fixed at 3%, O2 was 18%. In the present storage facilities O2 and CO2 levels are controlled independently. CO2 absorbers were introduced, first lime, and nowadays activated carbon scrubbers. Cold store air is led through these absorbers, and next the cleaned air is returned. 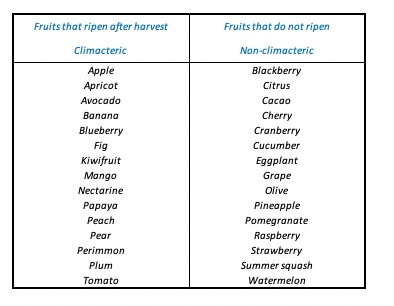 Ethylene is synthesised from the amino acid methionine with 1-amino-cyclopropane-1-carboxylic acid (ACC) as an intermediate. Its synthesis requires O2, and it is not formed under anoxia. Addition of CO2 to the storage facility not only inhibits respiration, but also ethylene production, and therefore ripening. CO2 is also known to decrease the sensitivity of fruits towards ethylene, and is one of the main causes of internal browning in fruits.

Nowadays about 80% of the apples and pears in The Netherlands is stored under CA conditions, and CA technology can be found in all fruit-producing countries. Fruits such as pears, stone fruits, blueberries and strawberries stored for a few days at temperatures of 0 to 5°C tolerate O2 values ​​between 0.5 and 1% (also known as Ultra Low Oxygen, ULO), while apples endure these levels for much longer periods. With prolonged CA storage, pears are normally stored at around 2-3% O2. Apples are usually stored at 1-2% O2 often combined with CO2 values ​​of 0.5-4%. The respiration rate of fruit is further reduced when crops are stored at lower O2 concentrations with the addition of CO2. In some cases, such as with kiwi storage, ethylene is additionally, actively removed from CA cold stores.

A side effect of low O2 is the accumulation of ethanol and acetaldehyde to concentrations that can result in off-flavours and physical damage. Ethanol is an end-product of an alternative, anaerobic way of sugar degradation. Acetaldehyde is an intermediate of this pathway, which is called fermentation. Fermentation takes place in the cytosol of the cells, and does not use the mitochondrial respiratory chain. The onset of fermentation can be used as a functional marker to indicate the minimal amount of O2 below which anoxic sugar breakdown starts. Practical trials have shown that apples can be stored at extremely low O2 concentrations. In the so-called Dynamic Control System (DCS), a kind of interactive ULO storage, low O2 levels in the storage facility are regulated on the basis of ethanol levels (product response control). However, in practice this method can be dangerous, because ethanol can be re-metabolised by a part of the fruits, meaning that ethanol is not always a trustable indicator. Alcohol can also arise from other processes, such as rot. 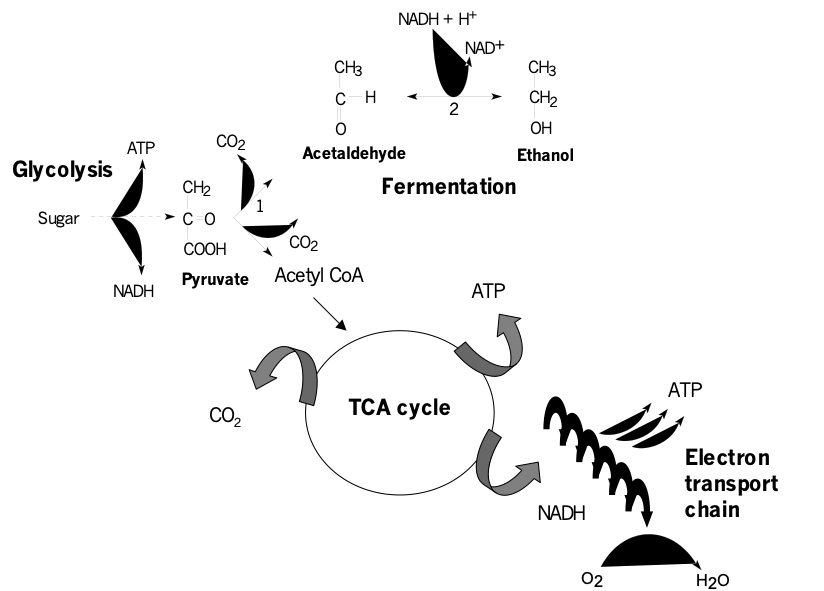 Regular CA practice may be described as a means to suppress respiration to the lowest possible level, without inducing (excessive) fermentation. This concept uses the Extinction Point approach (EP). This approach is defined by the lowest O2 concentration where no fermentation takes place. In establishing correct storage conditions the biological variation of fruits with respect to O2 tolerance plays an important role. Because ethanol synthesis can probably never be excluded completely, the Anaerobic Compensation Point, ACP, defined as the O2 concentration where CO2 production is lowest, is probably more practical. 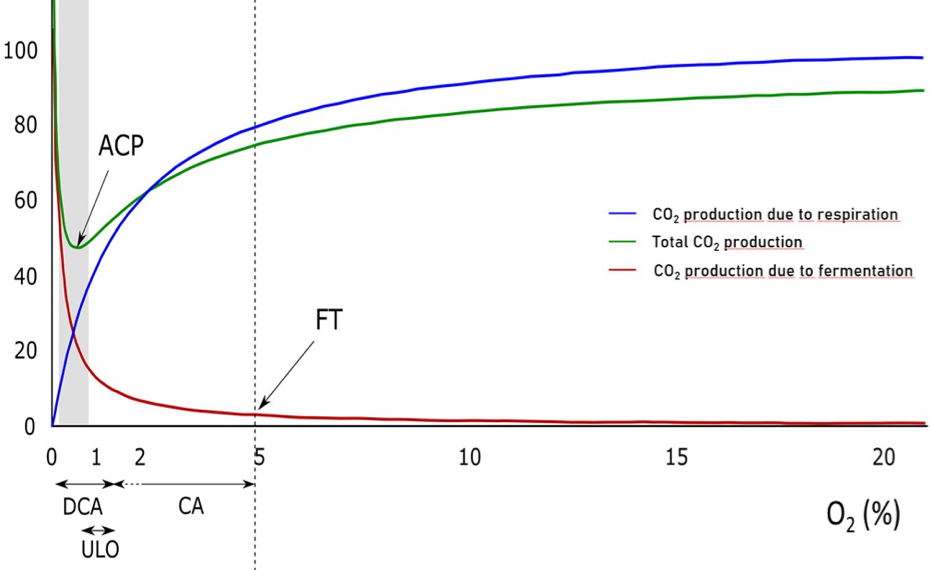 The best possible way to determine the ACP is to measure the respiration rate in cold stores. Several studies have shown that this method works well. However, practical implementation is still an obstacle. Blue Atmosphere is currently investigating a new method to determine the respiration rate. We are programming software that measures respiration rates and dynamically sets the optimum, safe O2 concentration based on them. This new, unique operating system is driven by a mathematical algorithm that is being developed in co-operation with Wageningen University (WUR).